When that roundup came, I think we were taken on a truck. And I believe that the, the Kitamotos came to our house also, Shigeko and her family. Her husband was also taken away. So we all went to Eagledale. I remember seeing a lot of people there and a lot of people up on the hillside, and I heard later on from one of the second grade teachers that my kindergarten teacher had also ridden her bike down to see us off. That’s what I remember specifically about that along with the soldiers. Then walking down onto the, onto the ferry. It was really, really an exciting time for me because we got to ride on the ferry. We knew we were going to Seattle. In those days it was a treat to go into Seattle. We might have gone in maybe once or twice a year. We got on the ferry and I was running around with all the other little kids. I didn’t even notice the, the adults and how they were reacting or feeling because I was so busy running around. When we got off the ferry we got onto a train.

There was a train waiting for us. I thought, “My gosh! We get to ride a train!” We got onto the train and the soldiers were there. We got our, our seats. They were walking up and down. The soldiers were so nice to us. They read us books. There was one with a guitar and he sang us songs. They, they really helped us children feel safe. I mean, I didn’t feel unsafe at all. They were so kind. They spoke a little funny because they were from New Jersey. They had this accent, but they were so kind to us. Then, then on the train also, we had a Pullman car, so some of us little kids were able to sleep on the Pullman. So, of course, I claimed one of the top bunks and I made my sister get off, out of that bunk, and she had to sleep on the bottom. I was kind of a bratty kid… not kind of. But I was a bratty kid at that time and I had a mind of my own. Anyway, we got… so we slept overnight there and we got off. I remember the blinds had to be down.

We got off the train. I don’t remember boarding the buses that took us to Manzanar. I do remember getting there. It was… everything was just flat, flat, flat. There were some black, long black housing. And I thought, “Oh, look at all those rhubarb houses.& Because my, my dad had a rhubarb house. “I wonder what those are for?” I found out it was our housing. And they were just, still building Manzanar at that time because our community was the first community to come. Then we saw all these men, working, pounding, building the houses. They were very, very dark because they were out in the sun so long.

There were ditches all over. They were still putting in the sewer and they were still putting in the pipes and things like that. It was very very dusty. The first thing we hit, I think was, a dust storm. And it was… it’s like being sandblasted. You have to get down like this, close your eyes, close your mouth, and just scrunch down. Still you’d get all that dirt and sand and everything. So that was, I guess, my first impression of Manzanar.

With Hisa Matsudaira
Exclusion and Internment
The Evacuation 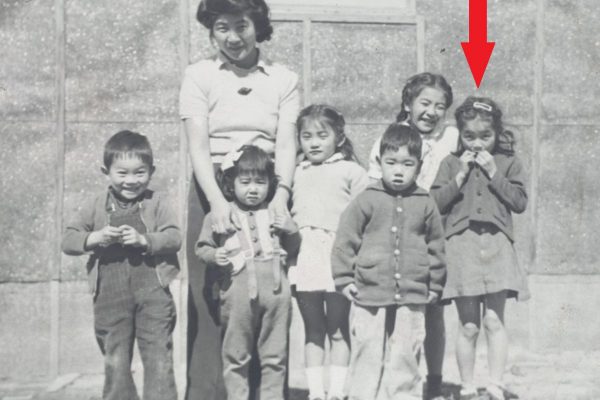 Hisa Hayashida Matsudaira was six years old, in kindergarten, when her family was evacuated. She is the second oldest of five children. Her father was interned in a US Department of Justice camp in Missoula, Montana when they evacuated.

Your ticket for the: A young child’s view of evacuation – Hisa Matsudaira (OH0049)