Interviewer: When the Second World War started, where were you at that time?

Taketo Omoto: I was workin’ in a wholesale greenhouse in, in Seattle. That’s when, I worked there ever since couple, one year I guess. Then I got my draft notice and my brother and two other Niseis were first drafted… Okazaki boys, Nishi, and Yamashita, they were drafted in, I believe, February or January, I mean, when the draft started. Then I got drafted in June of that year, ’41. So we were the only two brother I know of who drafted that early, before the war.

Interviewer: So you were drafted before Pearl Harbor?

Interviewer: So, how, what was your, your feelings about going in the service?

Taketo Omoto: Well, at that time, there was… war wasn’t going on. You figured it was six months. You figured you get it over with. That never happened. We were gettin’ paid twenty–one dollars a month.

Interviewer: And what happened when Pearl Harbor happened? Did anything happen to you as…

Taketo Omoto: Yeah, I was… after we left Fort Lewis where the induction center, I was stationed in Vancouver Barracks, Washington. They had a Barnes General Hospital there. And we… I was on night duty and I got off that morning. You know, they didn’t have much radio or anything, and I heard all this commotion, you know, “Japs had bombed Pearl Harbor” and all that. “Let’s start with him. Lets kill ’em all.” That kind of thing. But, it was… it didn’t bother me, but sometime when they get drunk, they… I was afraid they might harm me. But I never was harmed in any way.

Interviewer: Now, I understand that on some of the trips they put restrictions on them because they were of Japanese descent. Did that happen to you, too?
Taketo Omoto: Yeah, we were restricted on the post for a short time. They had soldiers patrolling the streets and everything. In January, we were transferred — there was four of us Niseis — transferred to Fort Snelling, Minnesota, for our own safety. There was eighteen, eighteen of us. Others were from the engineering, Vancouver Barracks engineering battalion. And at that time they were, they were all kind of a stranger to people in Minneapolis, they were real nice. They didn’t know who we were and stuff. Maybe we were prisoners of war, you know. So, they were real nice and people, when we go on the street, they stand and ask us what we were or something. That kind of thing. But I really enjoyed the people in Minneapolis there. Right there, you know, their war wasn’t like out in the Pacific Coast or… they didn’t talk about it much. 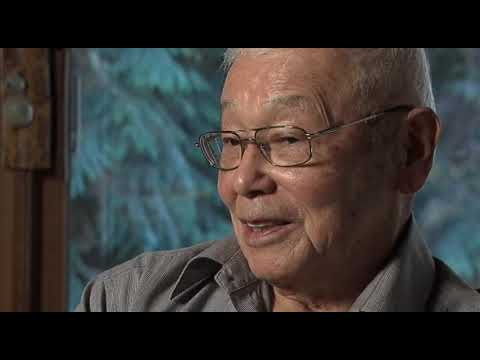 Taketo Omoto was 24 years old when the Bainbridge Island Japanese were evacuated. He is the second oldest of four brothers. When Pearl Harbor was bombed, he and his older brother were both in the army and away from home. Their father had already passed away. Eventually all four Omoto brothers would be in the army while their mother was still in camp.

Your ticket for the: Drafted before war – Taketo Omoto (OH0025)