Interviewer: So how long did you stay in Manzanar?

Jerry Nakata: I stayed a little over a year. In the fall of ’42, most of the young kids were in the service in this country, and they wanted farm labor help. So six of us from Bainbridge joined a bunch/group from the other camps. We went to Idaho and helped harvest the sugar beets and potatoes. That was real hard work. Some of those kids didn’t see a Japanese before, so it was really a novelty to them. But I think they were really, really surprised we spoke such good English, and that made it easy to come back.

I remember going to, in a theater with a couple of L.A. people, and they were wearing these suits, they call ’em “zoot suits” — no cuffs, tight cuffs, and their hair was just plastered with hair cream, plastered down. We went into this theater, small theater, about the size of the Lynwood Theatre. We sat about halfway down. The lights were still on, and as the movie was ready to start, the lights dimmed and I heard someone in the back says, “Geez, they got sideburns.” In them days, the talk was about the rice–bowl haircuts that they used in Japan, no sideburns. Then after the movie was over, we went outside. We were staying in the FHA camp, I don’t know how far away, but it was some of the kids started throwing rocks at us as we left the theater. Oh, the other two kids were, they were ready to fight.

But the kids were in a car, they didn’t stop, they just drove by. Then that same… in Idaho, when I was in Caldwell, we worked on the farm and were sortin’ onions. One of my crew bosses’ brother–in–law was in the 442, and he came on furlough ready to go overseas, and one of the other workers, Caucasian kids, says, “Look at that Jap. He’s in uniform, what’s he doin’?” He was ready to fight him. He was ready to take him on.

One of our crew bosses’ wife’s brother, he just, he came back from overseas, 442, and he was one of the first one who got hurt — he had a shrapnel in his, in the head, steel plate. I took him down to Caldwell, Idaho, and he says, “I want to get a haircut.” But on the sign there, door, it says: “No Japs. We don’t serve Japs.” He said, “I’m gonna go in anyway.” ‘Cause he had his, he had his Army uniform on, fatigues, and he went in there. He told me, “No luck.” He says, “I couldn’t get my hair cut.”

With Jerry Nakata
Exclusion and Internment
Leaving Camps During the War
Video Interview — February, 2006
To see this interview in its entirety, go to the Densho website archives. You will have to register to be allowed access to their archives. Once in the archive, visit the Visual History Collections: Bainbridge Island Japanese American Community Collection. 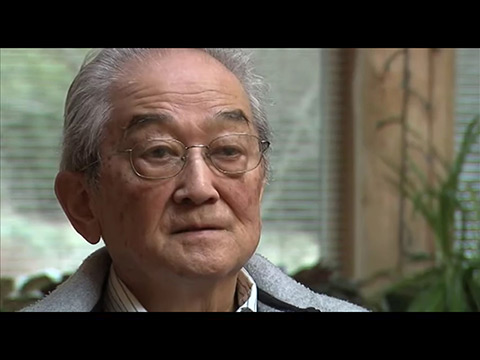 Your ticket for the: Farming, incidents in Caldwell – Jerry Nakata (OH0006)