The Filipino men, I was like… they were like an uncle to me. ‘Cause I… at that time, there was a grocery store right there on the corner of Miller and Fletcher Bay, I mean, on Battle Point Road. It was part of the Bainbridge Gardens complex. And the Nakatas and Ed Loverich were there, and… but I don’t know if it was there — anyway, I think the Haruis were there before the war, I mean, the Harui–Seko family, they had the grocery store before the war. And I remember Elaulio or Felix buying me an ice cream cone there and so, and I remember that. They treated me as, well, as I was one of their own kids. They spoiled me, actually.

They continued to support my family and our parents. They could easily have said, well, that they’re not gonna be supportive of the Japanese because of the, of the Pearl Harbor. But they… I mean, they too continued to go on as if things were the same. And Felix… my parents had Felix Narte look after the house. They lived in another separate building, but then they, my parents had them all move into this house and then keep the farm going as long as the, my parents were not here, and they did do that. And I think, I’m not sure, but I think Felix must have sent the money, whatever they made, to camp. And when we came back then they moved out and we moved back in. And so… anyway, if it weren’t for them, we wouldn’t have had a place to come home to maybe, or we wouldn’t have had a farm left, I think. But they did, so they were, they were like family to my parents. In fact, Felix and my mother were like brother and sister, and they argued and fought like brothers and sisters.

With Lilly Kodama
Exclusion and Internment
Exclusion Order No. 1 and Preparing to Leave
Video Interview — February 2007
To see this interview in its entirety, go to the Densho website archives. You will have to register to be allowed access to their archives. Once in the archive, visit the Visual History Collections: Bainbridge Island Japanese American Community Collection. 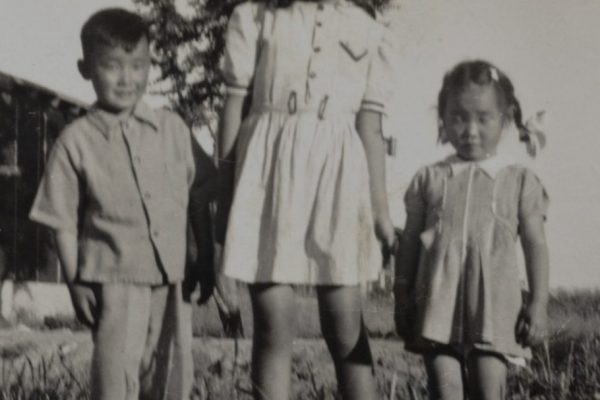 Lilly Kitamoto Kodama was 7 years old and in the 2nd grade when she and her family were evacuated. She is the oldest of four children. Lilly's father worked in Seattle. Felix Narte and Elaulio Aquino, two Filipino men who had helped Lilly's grandparents run the family farm, stayed in the Kitamoto home while they were away and looked after their property.

Your ticket for the: Help from Filipino friends – Lilly Kodama (OH0055)