I rode down there and I don’t remember the time, exactly, but right away there was a soldier pointing, and says you park there and walk up there and you stay up there. You cannot be down here. I said, I came down here to say goodbye to Jerry. He said you can’t even see him. You ought to stay up there, until the ferry leaves, then you can come out. And that was, I don’t remember how long we stayed up there, it was quite awhile.

But, uh, everybody was kinda furious, you know they wouldn’t let us get down there, and you could see the soldiers down there standing erect with their fixed bayonets and loaded rifles, at least they said they were loaded, and everything went peaceful. The ferry left, that was all. And I don’t remember any, who were the people that were up there standing with me. I wish I could remember. I asked members of my class but they weren’t up there.

Mike Tarabochia thought maybe, that he might have been down, and Gina Clinton, or Gina Ritchie, she thought maybe she had been there. Carmen Rereicich said no, she hadn’t seen them. But one of the class reunions, Richie Barr, said he caught the next ferry over and he got up on the overhead in Seattle and waved the guys as they were loading on to the train. I wished I had done that, but I had to go back to work.

With Earl Hanson
Exclusion and Internment
The Evacuation 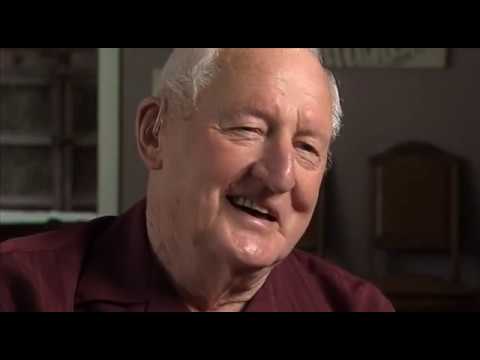 Earl Hanson grew up on Bainbridge Island. He is a member of the Bainbridge Island High School Class of 1941, a very close-knit class that kept in touch. Earl was good friends with classmate Jerry Nakata. Earl served in the army during the war.

Your ticket for the: Leaves work to say goodbye – Earl Hanson (OH0070)