I didn’t go out in the field very much, I was around the house, and I had to help clean. And my sister was the oldest person so she did most of the cooking, and I remember that she used to take clothes apart, you know, suits and thing, and she used to make clothes for me to wear to school. And as far as, you know, playing, I mean, we just played “kick the can,”; and we used to just throw the baseball back — I meant the ball — back and forth like we’re playing baseball. And we had these… oh, I can’t think of what else that… oh, I just remembered that when we were strawberry planting, that the… us young ones, they wouldn’t let us help with the planting, but they let us put the plants in the hole that they had made, you know, for the, each individual plant. And the, the families used to help each other. I mean, we used to get together with two other families and do all the planting in the springtime, you know, all together. And then we’d go to their farm and do their planting of the strawberries. That’s about the extent of how we helped each other. From then on, then we were kinda on our own to take care of the farm. And it was pretty difficult years. I mean, it was very… as far as feeding our family, we had six in our family, and my parents used to raise a lot of vegetables. And we, you know, didn’t have… raised our own chicken.

I enjoyed going to school because I didn’t enjoy working on the farm. [Laughs] And then when school vacation come, we used, we could hardly wait to get back to school again because that was kind of our pleasant outlet of not having to work. And in the summers, we had to all get out there, pick berries from very early in the morning. And I didn’t do that much picking because I used to come home and kind of help my sister do some of the cooking and things like that. But somehow during those years, I, I never had the feeling I had to complain. I don’t know why, I would think that at that age if I didn’t have anything I would complain. But, I guess it just never was in us to… we just accepted what we had and just made do with everything, with the things that we already had. And I used to envy some of the kids at school with their nice clothes and everything. But it’s, it’s something I just kept to myself and just accepted that fact.

After the harvest season, we used to have a big picnic. Bainbridge, they call it Bainbridge Picnic, and we all gathered and made a feast and had a big day of it. But… and then we used to have these Japanese movies at the, this hall in Winslow. It’s not there, it’s not there anymore, but I really don’t know where they got the Japanese film, but my parents used to take us all to this Japanese film. But it’s always, the kind were very sad and you cried because they were dying and things like that. But I don’t know, we just… we went and I don’t think we understood a lot of it ’cause it was in Japanese. But we used to be running around there in the dark. [Laughs] The kids used to be playing while our parents are watching. 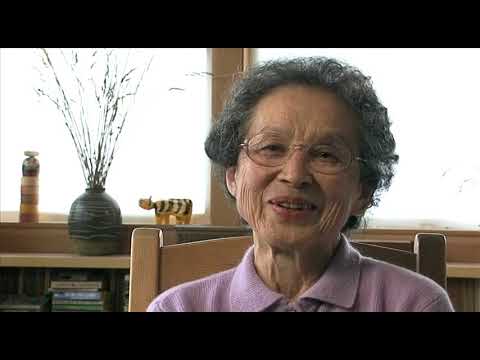 Eiko Suyematsu Shibayama was 13 years old on March 30, 1942; the day the Bainbridge Island Japanese were evacuated. She is the youngest of six children. The Suyematsus had a strawberry farm when the war broke out. When Eiko was in camp she was part of a group of young seventh grade girls who played together nick–named the "7-Ups."

Your ticket for the: Life on the farm, picnics, Japanese films – Eiko Shibayama (OH0031)