We were kinda anxious because we were going to someplace we’ve never been before. And when we got there, we had sunshine and the weather was nice. But they were just building Block 3, so the construction had just started. Block 1 and 2 were fixed, were already completed, but we were put into Block 3 and they were still building Block 3. The latrines weren’t hooked up yet, we had to use water from a pipe outside. Lavatories were regular outhouses, you know, and we had that, we had to use that for several days until the plumbing was all hooked up. But I think it only took about two days or so, and we had normal showers and bathrooms and such.

One thing I remember about Manzanar, the first thing that really hit us was the food that we were given. One of the things that they served more than once was lima beans, and I just didn’t like lima beans. [Laughs] But I could understand that the camp was just starting up and I’m sure they didn’t have a good supply of food there yet since we were in Block 3 and that Manzanar had thirty–six blocks. So, this was right at the beginning at Manzanar, camp at Manzanar.

Another thing that was bad there was once in a while we would get very strong winds, and we’d have real bad dust storms. I’ve seen some dust storms in eastern Washington, but that’s nothing compared to what we got down there. There were times that you couldn’t see halfway down the block because it was so dusty. And although that sort of let up after, oh, a year or so because I guess people started planting things and, and that kinda reduced the dust. It’s a sand flying, you know, real dusty. And I… we’ve never experienced that before, that was terrible. The barracks weren’t… well, they were built fairly good, but the sand would come through and it’s inside your house, too. So that was kind of miserable there for a while.

We, as far as us young kids, we were enjoying ourselves because the kids — at least my age, fifteen — had our friends there.

‘Course, we all liked to play sports. But at the beginning we pretty much had to arrange our own games, you know, pick‏up games, and baseball, mostly baseball and basketball. But like high school kids, that’s what we did. But 1943, after the Bainbridge people left, I had by then some classmates that were, I became friends with, and people from the L.A. area or some, some even from the Sacramento area. And so we did have some high school friends that we’d play together with.

High school was in a, classes were in a barrack, you know. We eventually had an auditorium, but I believe that we only used it for about a year after it was built. And then people started leaving, so… and then the camp closed shortly after that. But all the classes were in barracks, and they were in one area, one block. And lots of times, no chairs, you’d have to sit on the floor for a while until they got chairs. They did have some good teachers that were recruited for the school.

My dad said he liked the weather down there, and he didn’t see any reason for havin’ to move back to Idaho. He, he, I think he kinda thought that Idaho was too cold for him, but I didn’t know. I didn’t know what the temperature was up here but I wanted to go because my friends went. But that’s the only excuse that I got from my dad anyway. He thought the weather was just good or better down there so he decided to stay there. 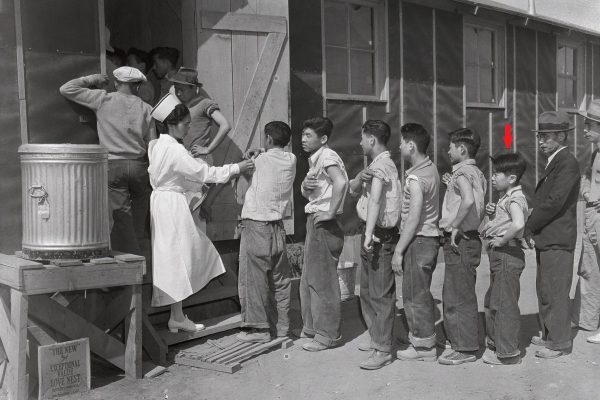 Victor Takemoto was 15 years old and in the ninth grade when he and his family were evacuated. He is the oldest of six siblings, five boys and one girl. The Takemoto family stayed in Manzanar during the entire war and was the first family to return to Bainbridge Island after the war.