Well, I think we had a great life. At least from my perspective it was great. Because we had all these wonderful things surrounding us. You know, the bay here, Fletchers Bay. We could fish or dig clams or whatever it is. Then we’d… it was more wooded in those days. And we used to have a wood trail that came to Fletchers Bay Park there. I was always at the tail end ’cause I didn’t have a bike and I had to run after my brothers, because they had bikes. I always remembered that. It was a wonderful time for us young kids ’cause we didn’t have the materialism that there is today. We, we took what nature gave us and play with it and go fishing and clam digging and all those things. I thought it was a great life. We didn’t have any worries. The only worry we had is when, when we start dinner again. Here was, it’s a gift of God, all these wonderful, natural toys, if you will. It was, it was, as I can recall, it was the best part of my life.

Well, most of the Japanese citizens that lived on the island were engulfed in their farms. And they had very little time for anything else. But I do remember some of the nice times that we had with our, our summer picnics. It was an annual summer picnic. And everybody would leave their farms and make nice lunches and the sake. I remember several gentlemen laying in the ditch out in Foster Park, which is only a few feet from here, drunk and feeling no pain. And that’s a very unusual situation that I confronted. But it was a lesson to know what sake could do for you. Those were memorable picnics they had and it was in Foster Park right here.

There’s a Foster Street now, but that’s all that’s left of Foster Park. But it used to be a park for citizens around that lived close to the activity. And, well, course what I strongly remember is that Bainbridge Gardens was not only a grocery store, but it was a post office. And it was a meeting place for people who just, who spread the news. Every and when you stop and think about it. There’s lots of these grocery stores in those days, probably only a mile or two apart. And they, they were local post offices and gossip places. And that’s how some of the news got around, ’cause most of the people didn’t have cars to go from one part to another, or one community to another. 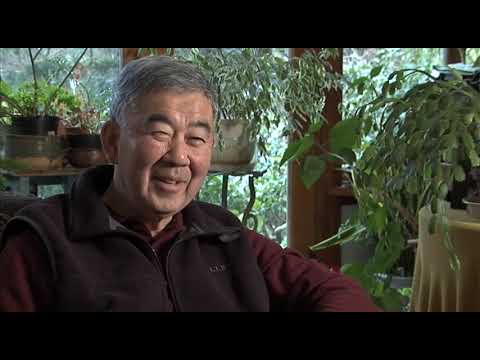 Junkoh Harui was 9 years old and in the third grade when Pearl Harbor was bombed. He was the second youngest of five children. The Harui family, along with the Shibayamas and Sekos, moved to Moses Lake during a short window when residents of Bainbridge Island were allowed to move outside of the exclusion zone. Junkoh's father, Zenhichi Harui, and uncle, Zenmatsu Seko, co–owned Bainbridge Gardens Nursery and Grocery store before the war.