We would always travel in what was called the “Blue Box.” The Blue Box was an old, I think it was a Ford truck body with a, with a, just a box on the back of it, and it looked like a bus. A very square–shaped bus. And it was blue and it was affectionately known as the Blue Box, because everywhere you went, you rode, rode in the Blue Box. You came over here to Bainbridge to pick up some of our friends, especially the young people and go on trips around the area, it was always in the Blue Box. So you talk to anybody in the Seattle area that’s a Nisei or maybe even Issei and you say, “Blue Box,” and they’ll have some story about the Blue Box.

Well, coming over to Bainbridge was really an adventure. First of all, part of that adventure is, is, riding in the Blue Box. Because it was such a unique bus, everybody in Seattle knew the Blue Box just from driving around. And usually when we came over to Bainbridge, it was oftentimes in a Sunday afternoon after church, or once in a while we’d come over early and maybe have a joint service, worship service, but mostly after church. And so the adventure was, was coming over in the Blue Box. And we’d usually bring friends from Japanese Baptist Church in Seattle. And so when we came over it was, it was a picnic time, it was a fun time to, to be with each other. And we’d just spread our, our goodies out on the lawn and sit down and just enjoy each other’s company as well as the food.

And then sometimes Dad would take the young people on — and some of the older guys I assume also — we’d go on these trips around the peninsula here, in the Blue Box again. Maybe up to Hurricane Ridge or, or Poulsbo or some other place around here. But just made a day of, of eating and excursion and just enjoying each other. It was great fun. And we always looked forward to coming over here and, and all the people on Bainbridge ’cause it was such a small Japanese community at that time, most of them knew when we were coming over so it got to be quite a party over here. We enjoyed that very much. 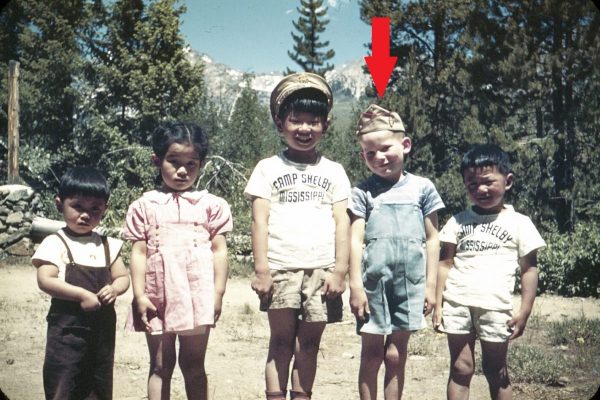 Brooks Andrews is the son of Reverend Emery Andrews of the Seattle Japanese Baptist Church. At the time of World War II, Brooks was four years old. Before the war Rev. Andrews and his family would frequently travel to Bainbridge Island for a joint service with Reverend Hirakawa, of the Lighthouse Baptist Church on Bainbridge Island, and also for Sunday picnics and outings. During the war, with all the Japanese Americans gone, Rev. Andrews moved his family to Twin Falls, Idaho to continue to minister to his congregation. Brooks grew up playing with children from the Japanese American community.

Your ticket for the: Reverend Emery Andrews and his trips to BI in the Blue Box – Brooks Andrews (OH0056)