Right after high school, somebody had told me that there was an opening for a housemaid, and my dad really couldn’t afford to let me go, but then he thought it would be good experience for me because I’ve always been at home working with the kids, and all that, that it would do me good to see what it was like on the outside. So I went to do housework in Seattle, and then the war broke out, and I remember listening to the radio telling me the Japanese had attacked Pearl Harbor and I was sad.

And then here I was in Seattle, and all the family were on Bainbridge and then shortly afterwards they said there’s no more aliens or the Japanese going back and forth to Bainbridge Island anymore. And somehow, I was stuck in Seattle, right? And so then, we had, our closest family friend was Mr. and Mrs. Tsujimoto that ran the [Ritz] Hotel in Seattle. And I called them. I says, “I don’t know what to do.” I said, “The war broke out, I can’t go home.” And she said, “Don’t worry.” She said, “You can evacuate with us, when the time comes.” You know, the evacuation story had come out. I don’t know how, uh, I don’t remember contacting Ms. McCullough — she was a missionary from Baptist church in Seattle that used to come out to Hirakawa’s church and we would get… she would gather us and we would go to her religion, you know she’d have a religious group there. — Anyway, when I was stuck in Seattle, she called me. I don’t know if I called her, or she called me, but she said, “I will take you to the US Attorney’s Office. We’ll go and see what we can do.” So she called me. She made the appointment and we went to the US Attorney’s Office one day. And she said, “This girl has to go home because she takes the place of her mother and with this evacuation she’s gonna be stuck here by herself.

Her father with two brothers and two sisters are on the island and you know, that I should belong back home.” I don’t know what was said at that meeting, but anyway, at the end of the meeting, the attorney said, “If you’re gonna go, I’ll give you permission to leave tonight, but you gotta go tonight.” And I thought, my gosh, I have to pack, I have to let Mrs. Tsujimoto know I’m going, because Mrs. Tsujimoto always said if evacuation come, and you had to go evacuate. She said, “You could come with us, we’ll make sure you won’t be stranded.” But Ms. McCullough said, you know, she would recommend I go home because it was my last chance so I did go home that day and I was able to evacuate with the family. Otherwise I don’t know where I would have been. So I really had a sad time, I think. 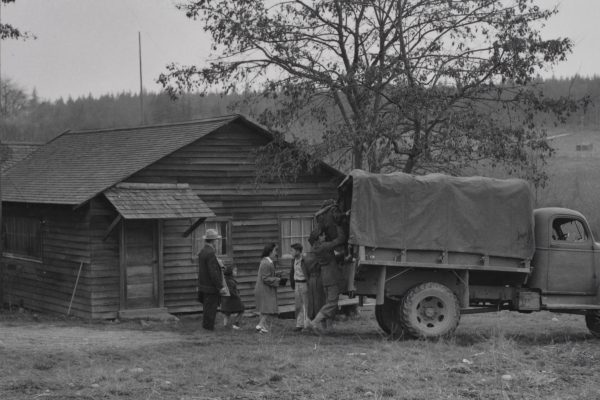 Yukiko Nakamura Takahashi was 19 years old on March 30, 1942; the day the Bainbridge Island Japanese were evacuated. Her mother had passed away when she was 13 years old. From then on she was in charge of running the house and taking care of her four younger siblings.

Your ticket for the: Stuck in Seattle after travel restrictions were imposed – Yuki Takahashi (OH0030)