The only thing that I remember was a couple of incidences. One of my neighbors up the street who was a good friend of mine had a birthday party, and she invited this other friend, but she says, “I can’t invite you because you’re Japanese.” And I thought, “Oh, that was awful.” And I was very disappointed. The other thing, I thought, “Well, I’m going to get into some of the activities for kids on the Island.” Well I wanted to join in the Girl Scouts.

I had been in the scouting program before the war. So I went up and asked if I could get back into scouting and they said, I forgot what she said. She said, “Oh, I’m sorry, we’ve got too many in the group,” or something to that effect. She made some kind of an excuse, and I thought, Okay, that’s too bad. So then I said… I asked the kids in the class and I said, I wonder if I could join the Rainbow Girls — that was a Masonic group that the girls used to do a variety of things and they used to have fun. — And so I said… so I asked one of my classmates and she said… she’d asked her mother. And her mother made some phone calls and her mother was told by headquarters that no, I could not join.

So that was three incidents there. Other than that I didn’t run into any discrimination really on the Island. I think, I guess there were a couple of things I guess I couldn’t go. I never got to go to any of the high school dances or things of this sort because of who I was. At least that’s what I thought my problem was, but I don’t know. So that’s …as far as discrimination, no, I really didn’t get into too much of that. And the Islanders on the whole were very, very nice to us.

With Sally Kitano
Exclusion and Internment
End of the War 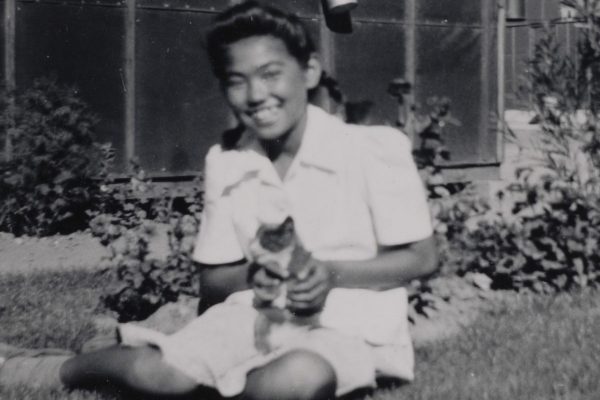 Shimako "Sally" Nishimori Kitano was 9 years old, in the fourth grade, when she was evacuated. She was the youngest of five children. The Nishimori family did not move to Minidoka with most of the Bainbridge Island Japanese. They stayed in Manzanar.

Your ticket for the: Discrimination – Sally Kitano (OH0074)